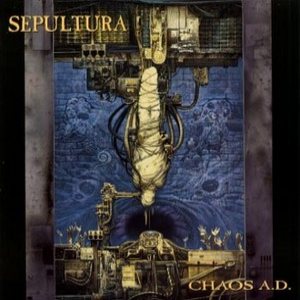 The intro to "Refuse / Resist" is an in utero recording of Zyon Cavalera's heartbeat.

Videos were made for Refuse / Resist, Territory and Slave New World.

The original version included a hidden bonus at the end of "Clenched Fist" in the form of laughter outtakes from "We Who Are Not As Others", increasing the length of track 12 to 8:01. An American pressing on Epic separates the laughter outtakes to a 13th track lasting 2:01.

Acoustic version of "Kaiowas", recorded live at MTV studios, was released only on MTV Headbanger's Ball 1995 compilation under the name "Kaiowas (Para MTVE "Most Wanted") (03:08).

Track 5 is inspired by a Brasilian Indian tribe called "Kaiowas", who lived in the rain forest. They committed mass suicide as a protest against the government, who was trying to take away their land and beliefs.

Re-released remastered by Roadrunner Records on August 31, 2012, together with Roots. as Roots / Chaos A.D. 2 CD set.