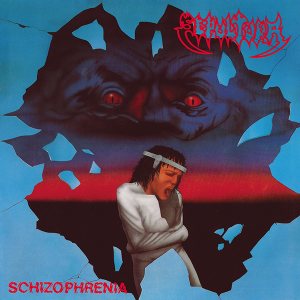 The classical intro is "O Fortuna", the opening score of Carl Orff's canata Carmina Burana, composed in 1935/36. The song is also reprised at the end of the opera.

On some versions of the Roadrunner re-release, the title is misspelled as "Schizoprenia" on the spine, omitting the "H".

After writing and composing 95% of the material for Schizophrenia, lead guitarist Jairo Guedz decided to leave the band before finishing it.

"Escape to the Void" is a cover (with different lyrics) of "Escape Into the Mirror" of Andreas Kisser's former band Pestilence.