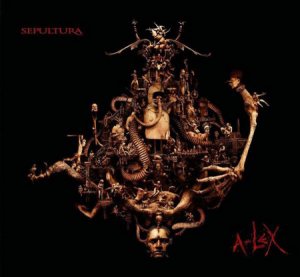 Additional notes
A-Lex stands for "no law" or "without law". It also resembles the name of the protagonist, Alex, of Anthony Burgess' A Clockwork Orange upon which the album is based.

A-Lex is available in three versions: in a deluxe digipak with an embossed cover, in a regular jewel case and on a vinyl gatefold LP.

This marks the first Sepultura album recorded without any of the Cavalera brothers.

Two other tracks were completed during the recording sessions. The songs were supposed to be included on A-Lex re-release, in April 2010, but everything was cancelled. One track (Seethe) was re-recorded and it was included on Kairos album.