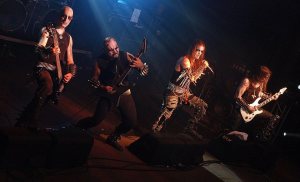 Additional notes
Taken from The Complete Tolkien Companion by J.E.A. Tyler:
"Gorgoroth 'Dreadful Horror' (The Sindarin or Grey-elven tongue) - A word in the Grey-elven tongue, used for two different locations, distinct in time and space.... the second instance is the name of the 'Haunted Plains' of Mordor; the great plateau which occupied the north-western area of that country, a desolate, arid land, pocked with craters and fuming pits and riven with many deep crevasses. In the centre of the plain rose the smouldering cone of the volcano Orodruin."

The band has never officially published their lyrics, neither through album booklets nor other sources, online or otherwise.

Diverse members of the band were involved in different crimes. Kjettar was convicted of church arson in the early 90's. Gaahl, in 2004 went to court on charges of "performing torture lasting for several hours" on a 41 year old man after beating him senselessly for hours. He was sentenced to four months in jail and pay $30,000 to the victim.

On January 4th, 2006, Infernus was taken to court on charges of kidnapping, participation in gang rape and illegal weapon possession. With exception of admitting some minor violations of Norwegian fire arm regulations he has declared himself not guilty. In May 2005, Infernus and a friend were sentenced to three years in prison for rape. Both of them appealed the verdict. Infernus won the appeal and was found not guilty in the rape case. He was however convicted of "gross negligent rape" (i.e. he should have known that the woman had been raped by his friend before he himself had sex with the woman - who had at this point surrendered mentally).

During October 2007, Gorgoroth members Gaahl and King ov Hell decided to kick founding member Infernus out of the band. A legal battle over the rights of the name and logo between Infernus and Gaahl / King then ensued. Gaahl and King carried on touring without Infernus for around 18 months after copyrighting the band's name and logo (before 'firing' him), while Infernus put together a new line-up.

Oslo City District Court delivered a verdict on March 10th 2009 on the main question in the Gorgoroth trademark case, which took place at the end of January 2009, deciding that King ov Hell's trademark registration #243365 of the band name was not valid and shall therefore be deleted.

The court states that King ov Hell and Gaahl excluded themselves from the band Gorgoroth when they tried to fire Infernus in October 2007. The court further states that Infernus cannot be excluded from Gorgoroth, unless he himself decides to quit. The remaining issues concerning financial matters and such are yet to be decided upon.

While many musicians have come and gone, Infernus has always stayed in the band, though the last two albums before the split were almost entirely composed by King. King has said that he "never really left" Gorgoroth despite his brief official absence between 2006 and 2007, which according to Infernus happened due to King's "difficulties combining playing in a clear-cut Satanic metal band as Gorgoroth with the fact that he is full-time employed as a primary school teacher."

The online broadcast network vbs.tv made a documentary about Norwegian black metal, but they focused primarily on Gorgoroth and Gaahl.

Frank Watkins began using the stage name "Bøddel" in 2009. Bøddel is Norwegian for "Executioner," which was the band Obituary's original moniker.