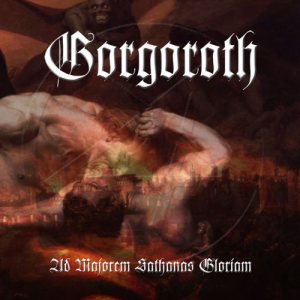 Ad Majorem Sathanas Gloriam has been released in a limited edition digipack on Regain Records.
This edition features slightly modified cover art and a bonus DVD which includes the uncensored version of the "Carving a Giant" video not previously seen on MTV or YouTube as well as "The Making of Carving a Giant" documentary.
More information on the release is available via Regain Records' website.

The title is Latin for "For the Greater Glory of Satan". It is a parody of Ad Maiorem Dei Gloriam ("For the Greater Glory of God"), the motto of the Society of Jesus, conceived by Infernus after having read an article on the counter-reformation and the Jesuits. This is so far the only Gorgoroth album not to have any titles and lyrics in Norwegian.

The artwork used is from the painting Dante and Virgil in Hell by William-Adolphe Bouguereau.