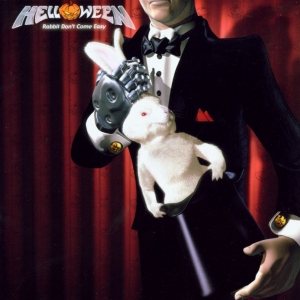 The track "Do You Feel Good" is a track originally written during the The Dark Ride album sessions, but was never used.

Mark Cross was officially part of the Helloween line-up for this album before he came down with Chronic Fatigue Syndrome during production and in the end played drums on only 2 of the tracks ("Listen to the Flies" and "Don't Stop Being Crazy"). Mikkey Dee was brought in as a last-minute replacement on a session basis for the rest of the album. Stefan Schwarzmann played only on the b-sides.

A two-disc compilation containing The Dark Ride and Rabbit Don't Come Easy (12 tracks each, with no bonus tracks) was released by Nuclear Blast Records in 2008. On the back cover a 13th track is listed for the second disc, "13. Far Away", but it's actually missing on the CD.