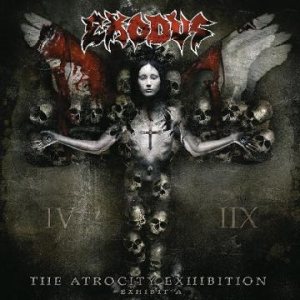 The Atrocity Exhibition... Exhibit A

A video was made for "Riot Act".

Also sold as a limited edition "blood pack" exclusively through Nuclear Blast's European mailorder website. This version is limited to 500 copies and includes a DVD-sized case dripping with "blood", a certificate of authenticity and a hidden bonus track.

The song Bedlam 1-2-3 fades slowly and ends at 7:59 followed by 10 minutes of total silence.
At 18:12 (with 1:39 left to go) a country style version of the title song from their 1985 debut album Bonded by Blood begins. For the country sound of the song it was nicknamed "Bonded by Banjo" or sometimes "Banjoed by Blood".
The song ends with a "Yeehaw!" heard in the background followed by an untitled 6 second hidden track where you can hear ever so slightly in the background someone screaming "That was some heavy shit!" in a barely audible gibberish sounding voice.