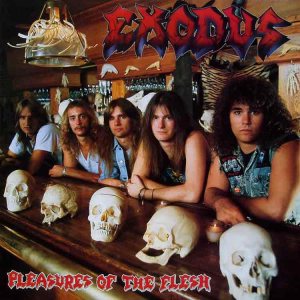 Pleasures of the Flesh

SludgeLeader
Pleasures of the Flesh Information

Trivia:
- Even though Paul Baloff left Exodus about a year before this album was released, he is credited as the co-writer of "Seeds of Hate", "Pleasures of the Flesh" and "Brain Dead".
- The album peaked at #82 on the Billboard 200.
- The lyrics here are taken from the booklet, except for few obvious typos that were corrected.
- The original cover was an illustration of Exodus depicted as cannibals preparing and eating their meal. However, just prior to the album's release, it was replaced by a photograph of the band members sitting in a bar.