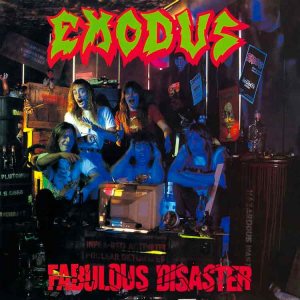 Trivia:
- The album peaked at #82 on the Billboard 200.
- "Overdose" does not appear on the vinyl and cassette versions. However, it appeared on the Brazilian vinyl version as well as the 2008 Back on Black vinyl reissue.
- Some versions of Fabulous Disaster misprinted the color of the Exodus logo in red and yellow rather than blue and green. The Exodus logo was also white and pink on the French cassette version, while the Canadian cassette version featured a white and clear logo.