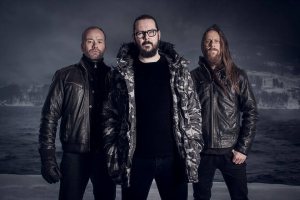 Best Emperor Songs (28)
Additional notes
Emperor have sold over 500,000 albums worldwide over the course of their career as of 2003.
They played their first gig on 13 April 1992, alongside Enslaved, Algol and Infinite Decay.

Emperor were one of the bands somewhat involved in the church burnings during the mid 1990s. Samoth was jailed 16 months for taking part in church burnings with Varg Vikernes (Burzum), along with other members of the Norwegian black metal scene. Drummer Faust was jailed for church burning and for the stabbing and murder of a homosexual man in 1992 (he was never suspected for it until 2 years later when he was arrested in 1994).

The group disbanded in 2001 because they felt they had lived up to everything they wanted to with Emperor. They have received "legendary" status, toured worldwide, have a large catalog of releases, and they didn't want to be known as another group that "never knows when to quit making music".

They reunited to play at Scream Magazine's anniversary festival and to headline the 2006 editions of Norway's Inferno Festival and Germany's Wacken Open Air. In an interview with UK Magazine Terrorizer, Ihsahn hinted at the possibility of another Emperor album, but stated that Emperor is now a side project.

In 2013, another reunion was announced, with original drummer Faust, to headline Bloodstock Festival in 2014, and the 25th anniversary of the Wacken Open Air festival in the same year. This reunion also marks the 20th anniversary of "In the Nightside Eclipse".

Emperor participated in the Celtic Frost tribute "In Memory Of... Celtic Frost" released by in 1996 covering the Hellhammer song "Massacra" For this recording, the line-up consisted of Ihsahn (vocals and guitar), Samoth (bass) and Dirge Rep (drums).
In 1998, appeared on the compilation "In conspiracy with Satan - a tribute to Bathory", with a cover of "A fine Day to Die".

An Emperor guitar/bass tablature book titled "Scattered Ashes - A Decade of Emperial Wrath" was released by Candlelight Records in 2006. It features 13 Emperor classics transcripted by Ihsahn and comes with a free CD (the first disc of the compilation of same name released in 2003).
Contributors