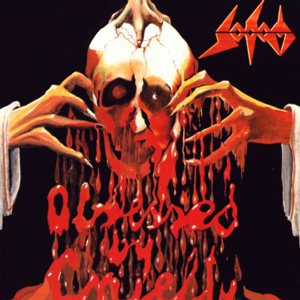 Additional notes
Obsessed by Cruelty was actually recorded twice, and both versions of the album were released in different territories due to an error by the record company. The first session was recorded in Berlin, supposedly by Horst Müller, with Destructor as the guitarist. The record company deemed the recording quality to be too poor for the album to be released, so all the tracks, as well as a new one called "After the Deluge", were recorded again at Studio Hilpoltstein (near Nuremberg) by Bobby Bachinger, with a new guitarist called Ahäthoor (aka Assator).

The original, rejected, recording from Berlin was accidentally used on the original US edition, released by Metal Blade, and most editions of the album on all formats. Only the European Steamhammer edition of the LP seems to contain the second recording from Studio Hilpoltstein with the additional "After the Deluge" track.

Re-released in 2000 together with "Persecution Mania" and "In the Sign of Evil" as "2 Originals of Sodom".