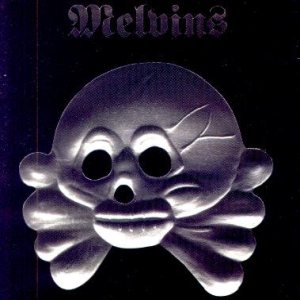 Additional notes
In 1996, Amphetamine Reptile Records did a series of vinyl singles for the band, with 2 songs per single. There was one released each month, so 12 were done in total. Each one was limited to 800 copies. The songs were a mixed bunch, from covers to live recordings to rejected demos from the Atlantic-years.

The final song on disc 2 is actually performed by Brutal Truth, and it's them covering The Melvins' song "Zodiac."

***Exact text of insert***
In 1996 The Melvins and Amphetamine Reptile Records issues one single a month in worldwide editions of 800. Here's the vitals on each 7" as they originally appeared.

#1
a: Lexicon Devil recorded 1993. A Germs cover
b: Pigtro recorded in 1994. a special mix for A&R guy at Atlantic
#2
a: In The Rain recorded 1995. The birth of Brit Pop....shit pop
b: Spread Eagle Recorded 1993. A special mix for our A&R guy
#3
a: Leech recorded live to two track. 1994 in memory of "Bing"
b: Queen recorded 1994. Special mix for A&R guy
#4
a: Way of the World. A Flipper cover. Recorded on Chinese new year
b: Theme a Clown Alley cover recorded in Sweden on our first euro tour
#5
a: It's Shoved. We &ltu &ltthink it's live but it might be rehearsal/keg party
b: Forgotten Principles recorded 1983 with original lineup of Matt Lukin and Mike Dillard
#6
a: GGIIBBYY. a bad song we chopped off the Houdini record.
b: Theresa Screams. Hands down our all time favorite Melvins song
#7
a: Poison. Our mix of the Wayne Kramer original
b: Double Troubled. A weird mish mash recorded ?????
#8
a: Specimen recorded for Stag at the last minute
b: All At Once Nuff said
#9
a: Jacksonville. 1994 with L7. Our favorite gig of the tour
b: Dallas. 1995 with NIN. Our favorite gig of the tour.
#10
a: The Bloat. Demo for Stag sessions
b: Fast Forward. Buzz & Dale playing with a cassette recorder
#11
a: Nasty Dogs and Funky Kings, teen age attempts at arena level rock
b: HDYF recorded in 1996 with IMA of Yoko Ono fame
#12
a: How-++-Harry Lauders Walking Stick Tree, a rare blend of two classics
b: Zodiac courtesy of the band "Brutal Truth"