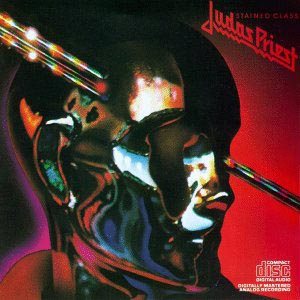 Additional notes
2001 Remastered version bonus track :
10. Fire Burns Below
11. Better By You, Better Than Me (live)

LORDOSOLIVAIS  (85/100)
Date :  2017-08-29
1977’s Sin after Sin saw Judas Priest almost fully developing their core sound, their true heavy metal style that would serve as a cornerstone whereupon all of their next releases would be built. Guitarists K.K. Downing and Glenn Tipton were using their talents more than ever to create innovative, stunning guitar work, vocalist Rob Halford was growing more and more confident, bassist Ian Hill did not go unheard, and finally a drummer competent in the heavy metal scene would join. This drummer however, Simon Philips, was only a session musician who left after the recording of Sin after Sin. Soon afterwards, Les Binks was chosen as a tour drummer, but the band was so impressed with his performance they asked him to stay. Binks was an accomplished and technically skilled drummer who contributed just as well, if not better than Simon Philips, to Judas Priest’s heavy metal sound. The production of the album, at that point, was the clearest and cleanest so far. Coinciding with these changes went the introduction of what would become the classic Judas Priest logo. A logical change, because of the logo’s metallic look that would work better with Priest releases from then on, in contrast with especially Sad Wings of Destiny, with which the gothic-styled look suited perfectly. Priest’s fourth record was released in 1978 and called Stained Class, and has remained the only album in the band’s history that contains song writing contributions by all band members. It is often hailed as a classic in their catalogue and as an influence on the speed metal genre.
0
Reviewer :