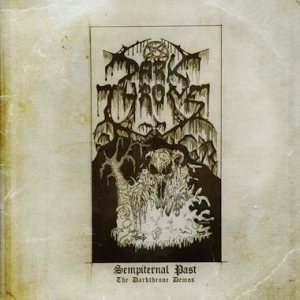 Sempiternal Past - the Darkthrone Demos

Additional notes
Recorded at various places in the Oslo area, 1988-1989. "God of Disturbance and Friction" recorded at Necrohell studios, November 1999.

Released in gatefold sleeve including insert with all demo covers.

"Sempiternal Past - The Darkthrone Demos" contains all four of Darkthrone's cult demo releases recorded in 1988-1989 ("Land of Frost", "A New Dimension", "Thulcandra", and the live tape "Cromlech"); now fully restored & remastered from the best tape sources available. Also included on this release are the tracks recorded at Bootleg Scene for Oslo TV in 1989 (recorded during the same show as the "Cromlech" demo), along with a restored version of the non-album track "God of Disturbance and Friction".

"Sempiternal Past - The Darkthrone Demos" is presented on limited double vinyl with gatefold sleeve - with the sleeve including band notes and rare photos.