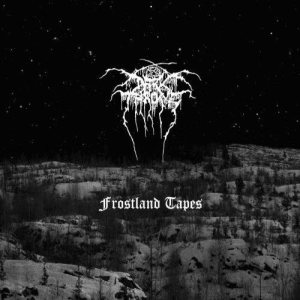 Additional notes
The release of Frostlands Tapes coincided with the band's 21st anniversary. It is the first official release to contain all four of Darkthrone's demos.

Frostland Tapes includes a live recording from Denmark in 1990 and the previously unreleased instrumental version of the 1991 Goatlord rehearsal session.

These songs were intended to feature on the proposed second album, before the band changed direction and the tapes were confined to the vaults. Vocals were subsequently added in the mid-nineties and this version became the Goatlord album (1996), but they are presented here as the recording sounded in 1991.

The set comes in a rigid digibook featuring an interview with the band, chronicling their early days, ambitions and inspirations.

A later version of the album was released as a 2CD - it includes all of the same songs, but crammed onto two discs.