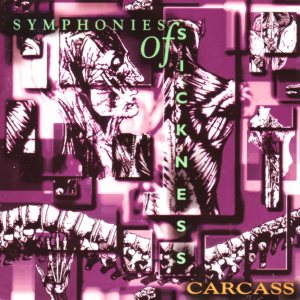 A limited edition (featuring the "gore" cover artwork) was once released containing 16 bonus tracks taken from the "Reek of Putrefaction" album. The total running time of this version is 76:58.

The original "gore" cover, which was later banned and replaced by a "clean" cover, which was drawings of a human similar to those found in biology books. The exact same cover was used for "Reek of Putrefaction" except with a different color scheme. Now in the year 2002/2003, the gore covers were put back.

October 2008 reissue: Fully remastered on a DualDisc (combined CD and DVD) in a deluxe digipak with expanded artwork. It includes part 2 of a mini-documentary series entitled "The Pathologist's Report" as bonus video material on the DVD side, plus 6 bonus tracks from the "Symphonies of Sickness" demo-tape on the CD side.