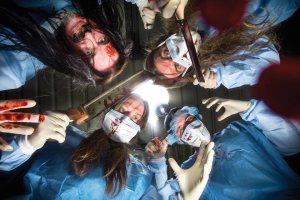 Best Carcass Songs (18)
Additional notes
Carcass is considered to be the major inspiration and musical foundation for most deathgrind/goregrind bands, as well as being one of the founding fathers of melodic death metal when they had switched their genre to the melodic death metal sound by the early '90s.

The band was first known as Disattack, playing hardcore punk back in 1985. After releasing their first demo in 1986, their bass player left the band and Jeff Walker joined them after leaving Electro Hippies. By that time, they were also changing their name to Carcass, whose logo was drawn by Jeff Walker. Soon their drummer was replaced by Ken Owen and the singer by Sanjiv. Bill Steer also left Napalm Death in order to concentrate on Carcass.

Carcass started as a goregrind band which they carried out on their demo tapes, and first two albums, then moved to a death metal sound which evolved into their melodic death and heavy metal roots before their split. Their Heartwork album, released in 1993, is one of the first melodic death metal albums ever released.

Bill Steer moved into the stoner rock band Firebird (not to be confused with the 1978 NWOBHM band Firebird, Mike focused on his retro band Spiritual Beggars before forming a side-project with his brother Chris called Arch Enemy which went on to become very successful. Jeff, Ken and Carlo formed the short-lived Blackstar after the demise of Carcass.

At the age of 28, Ken Owen had a brain haemorrhage, and was in a coma for almost a year. He was confined to a wheelchair for a time, but has since partially recovered and despite heavily confined movement has began playing drums again.

Carcass reunited in 2007 for touring purposes. Despite Ken Owen starting to play drums again, he is still unable to perform to the level required for Carcass. Daniel Erlandsson of Arch Enemy replaced him for touring purposes. Despite this, Owen has been involved in the reunited band's activities, and makes brief appearances at selected live shows.

Amott and Erlandsson both left Carcass in 2012 when the reunion became a full-time one, in order to avoid scheduling conflicts with Arch Enemy.

A UK edition of Bjork's "Isobel" single has a version of the song "remixed" by Carcass (in fact it was just the vocals to the original song mixed over an entirely new piece of music).

Jeff Walker appears on the release The Final Remixes by Die Krupps with a cover version of their track Inside Out.

The track 'Captive Bolt Pistol' from Surgical Steel was featured in a 2014 episode of the American CBS television show Elementary.
Contributors