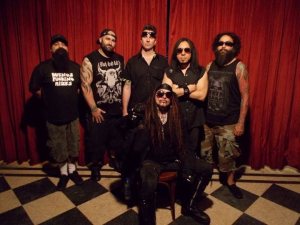 Additional notes
Ministry played their final concert at the Tripod in Dublin, Ireland on 19 July 2008, and split-up later that year. They announced a reunion on 7 August 2011. Devastated to continue on without guitarist Mike Scaccia, Ministry split-up once again after they released their new album "From Beer to Eternity" in September 2013. However, they reunited in 2014, again.

Ministry have been regarded as one of the pioneers of the industrial rock/metal genre along with others like Skinny Puppy, Front Line Assembly, Godflesh, Pitchshifter, Nine Inch Nails and Tackhead who all had a more "extreme" approach on the industrial metal genre.

Al Jourgensen got the band name from the B Movie titled "Ministry of Fear."

Al Jourgensen goes by a number of pseudonyms which include Alain Jourgensen, Alien Jourgensen, Hypo Luxa (his alias as a music producer), Dog, Alien Dog Star and Buck Satan.

The band started playing new wave style music (coming from the demise from Al Jourgensen's first band Special Affect.) Over time, during the early 1980s, Ministry had evolved to what is now industrial music.