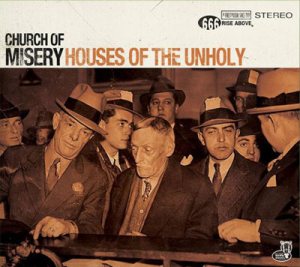 Houses of the Unholy

SludgeLeader
Houses of the Unholy Information

Additional notes
Recorded and mixed at the Los Angeles Club (Tokyo, Japan), November 2008.
Mastered at Peace Music, January 2009.
All songs and lyrics by Tatsu Mikami, except lyrics for tracks 1, 3 & 4 by Thomas Sutton, and Master Heartache by Sir Lord Baltimore.

The album title references that of Led Zeppelin's "Houses of the Holy".

The photo on the cover is from the trial of Albert Fish, an american serial killer.
Track 3, "The Gray Man", is titled after one of his aliases.