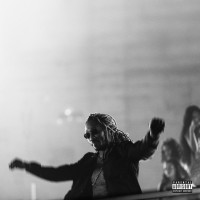 I go to Jamaica then tag 'em with a hundred snipers
I dip the ice and go (Woo), I step out icy, frozen (Woo)
I hit professional (Woo), I have déjà vu, I know (Woo)
I'm gettin' my decimals (Woo), I'm going digital
Spazzin' in Jimmy Choo, bagged up plentiful
Tell me how I'm supposed to be sober in my interview (sober)
Last night I was growing up (I was in Fendi too)
Took flight, I've been going up (That's a ritual)
Passport and we going up like some animals
Addied up and I'm gassed up, change the temperature
Triple rows, tall hoes, they identical
Minute Maid, Hi-Tech splash (Goin' crazy)
Drug raids got me cold, got me cocky (Ahh)
Can't stand it, won't enjoy life if it ain't toxic
Cuban links, walking on ice, I don't play hockey
I was trained standin' on Front Street and I'm saucy
High pro, foul superstar codeine coughing
Cop a Porsche, cop a Range Rover, it's King Joffrey
Kick a door, smokin' sherm sticks, they opps, sees 'em
Piss poor, we sticking together like (Gang)
King Kong, I'm taking drugs out my body
Insane, inside my brain and my posse

The police need your help in tracking down a suspect in a bank robbery this morning on the city's north side
According to police, the suspect walked into the bank about nine this morning
Went straight to one of the tellers, handed over a note that said
"Put money in bag"