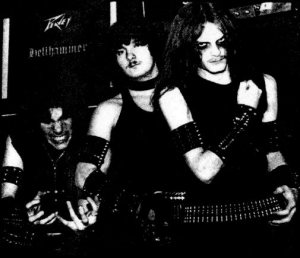 Additional notes
Formed in May 1982 under the name Hammerhead, which was soon changed to Hellhammer.

Hellhammer are widely credited as pioneers of extreme metal (black metal in particular) along with Venom, Bathory and a few others. Tom G Warrior and Martin Ain formed Celtic Frost the day after Hellhammer disbanded.

Hellhammer had two more short-term bassists that time has since forgotten in 1983 (Mike Owens has previously been listed as a drummer, Hellhammer's new website credits him as a bassist). Despite the "Warrior brothers" thing, Steve and Tom are unrelated. Steve was originally a roadie for Tom's previous band, Grave Hill.