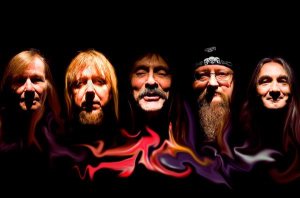 Additional notes
Formed in 1969, Hawkwind are a prolific and pioneering space-rock group from the UK. Within weeks of their formation, the band had made a name for themselves on the free festival circuit and would perform live without fee wherever they were able. By the time of their 1971 album 'X In Search Of Space', Hawkwind were infamous for their science fiction themed music and theatrical concerts, the latter renowned as exhibitions of pulsing electronics, dazzling light shows, LSD consumption and (from 1971-75) a nude dancer in the form of Stacia Blake.

Despite a near-constant revolving door of members, Founder member Dave Brock has been the sole mainstay and the core of the band since its inception and has steered the band from its psychedelic rock roots into flirtations with heavy metal, new wave, ambient and techno. Notable contributors have included "accidental" bassist Lemmy (who would go on to greater fame with Motörhead), Cream's Ginger Baker and science fiction writer Michael Moorcock.
Contributors