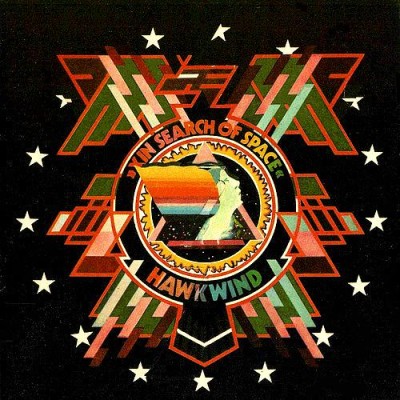 In Search of Space

Eagles
In Search of Space Information

The back cover has a blurred shot of Stacia dancing on-stage, with text that encapsulates the essence of the work:
"Technicians of Space Ship Earth
This is Your Captain Speaking
Your Captain is Dead"

The 2nd album by Hawkwind, released in the UK 8th October 1971. Recording began briefly at Air Studios [Master Of The Universe], then moved to Olympic Studios. The innovative sleeve design was by Barney Bubbles [Colin Fulcher]. An 8-page fly-out (unlaminated card) printed full-color on the front and black & white half-tone on reverse. When opened out, the die-cut sleeve forms a bird shape with outstretched wings - rather like a hawk. When folded, the die-cuts interlock at the front center, the shapes and print forming an 'X', per the initial character of the title. The folded form thus creates an open-top wallet for the disc.

Regarding the 'X', the "Optics/semantics" credit on this is probably quite profound in retrospect. The visual semantics of Barney Bubbles' design and creativity in the sleeve art has led to much conjecture regarding the true title of this work. To those in the Notting Hill cradle of the 'underground movement' and in its music press at the time, the work was commonly known (from its cover art text title »X IN SEARCH OF SPACE«) as "X In Search Of Space". Indeed, the 'X' form also appears behind the title of the sleeve and in the background of the Log Book cover. The Log, developed by the artist and Bob Calvert was fundamental in the resulting imagery and 'philosophy' of the band by the time of Space Ritual and beyond, further aided by input from Michael Moorcock. However, despite the visual evidence of the title - designed by an artist of high regard and displayed in galleries as "X In Search Of Space" and also referred to as such in MOJO magazine's 2010 Book of The Year Award "Reasons To Be Cheerful" - the various issuers of this work have consistently titled it "In Search Of Space", for reasons so far unknown. There is even 'kerning controversy' that the title may be "Xin Search Of Space", but the Discogs' database simply opts for the inclusion of the fact that the 'X' exists in the title, until it doesn't.

The UK disc is in a UA imprinted liner, accompanied by a 24-page 'Hawkwind Log Book' (printed black & white) detailing the minutiae of the band's 'flight' through space & time. This was not present in subsequent issues, although the 1996 CD remaster reproduces both the Sleeve & Log. Initial copies of the log were on off-white 'newspaper quality' paper, later issues appear to be on a cleaner white with a blue tinge to the black print. There is a distinct difference in the two, the latter of better quality - issued with the paired A1/B2 pressings & thereafter.