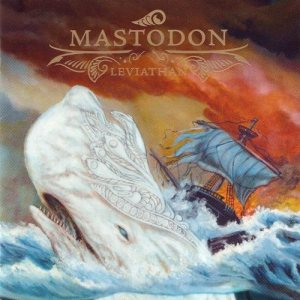 Additional notes
Recorded and mixed by Matt Bayles at Robert Lang Studios, Studio Litho and Ek Studios in Seattle, WA, in March 2004.
Mastered by Alan Douches at West West Side Music in Tenafly, NJ, in April 2004.

The above release date refers to the US release; the European release was the 13th of September.

"Leviathan" is heavily influenced by the novel "Moby-Dick." The songs tell stories relating to the tale of "Moby-Dick".

All music and lyrics by Mastodon, except "Aqua Dementia" which was also written by Scott Kelly.

Music videos were made for "Iron Tusk", "Blood and Thunder", and "Seabeast".