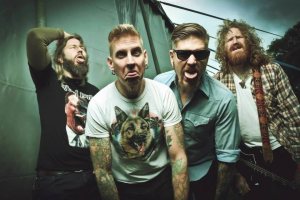 Additional notes
Brann Dailor and Bill Kelliher met the other members at a High on Fire show.

Founded as a five-piece with Eric Saner on vocals, who left the band just before going on tour. The rest of the band members completed the tour sharing vocal duties, and eventually decided to continue as a four-piece.

Scott Kelly from Neurosis has appeared as a guest vocalist on all of Mastodon's full length albums, since "Leviathan".

They are featured on the Melvins tribute playing the song "The Bit," and also on Kerrang! magazine's tribute to Metallica's "Master of Puppets", playing "Orion".

Appear on the soundtrack for Aqua Teen Hunger Force Colon Movie Film for Theaters with the song 'Cut You Up with a Linoleum Knife'.

Appeared in the HBO television series Game Of Thrones (episode 5.8, "Hardhome") and contributed the song 'White Walker' to the "Catch the Throne, vol.2" mixtape released online to promote the show's fifth season.