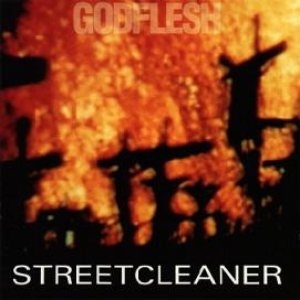 Additional notes
The title Streetcleaner may have originated from the band Whitehouse, one of Justin's influences. On their Right to Kill album they have a song called The Street Cleaner which might have influenced the band to choose that for their first full length album title.

On the original copy of the CD, tracks 6 and 7 are read on the case to be one whole track but they are two individual tracks (as presented in the tracklist here.)

These were recorded for an EP called Tiny Tears that was never released.

Re-released as MC and CD in June 1994 by Earache Records with inferior cover and back art.

The artwork used for this album is actually a screenshot from a scene in the 1980 sci-fi/horror film 'Altered States'.

The 2010 remaster combines the tracks "Devastator / Mighty Trust Krusher" into one track, as originally intended.

There was a music video made for "Christbait Rising".