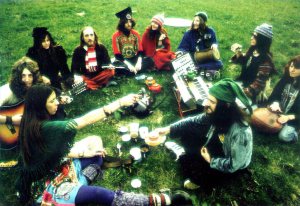 Camembert Electrique contained the first signs of the band's mythology of the peaceful Planet Gong populated by Radio Gnomes, Pothead Pixies, and Octave Doctors. These characters along with Zero the Hero were the focus of Gong's next three albums, the Radio Gnome Trilogy, consisting of Flying Teapot (1973), Angel's Egg (1974), and You (1975). On these albums, protagonist Zero the Hero is a space traveler from Earth who gets lost and finds the Planet Gong, is taught the ways of that world by the gnomes, pixies, and Octave Doctors, and is sent back to Earth to spread the word about this mystical planet. The bandmembers themselves adopted nicknames -- Allen was Bert Camembert or the Dingo Virgin, Smyth was Shakti Yoni, Malherbe was Bloomdido Bad de Grasse, Tritsch was the Submarine Captain, and Pyle the Heap. Over the course of the trilogy, Tritsch and Pyle left and were replaced by Mike Howlett (bass) and Pierre Moerlen (drums). New members Steve Hillage (guitar) and Tim Blake (synthesizers) joined.