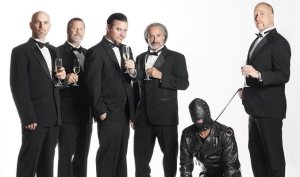 Additional notes
There was an earlier incarnation of Faith No More that existed in 1979-1980. The lineup remains unknown, but back then, they were known as Sharp Young Man, who changed their name to Faith No Man before finally settling with their current name.

Faith No More were split-up from April 1998 to February 2009. After spending 2009 and 2010 touring the world, they played their final reunion concert at Estadio Bicentenario de La Florida in Santiago, Chile on December 5, 2010. However, they had continued to play live shows since then. The band last toured in 2012, before going on hiatus and resurfacing in 2014.

Many consider Faith No More to be the fathers of the "alternative metal" genre. Their popularity grew with the 1989 now-legendary album "The Real Thing" containing their well-known hit "Epic." The band remains a dominant influence on the genre they helped create.
See also Alice in Chains, Helmet, Melvins, Soundgarden, Fear Factory, and White Zombie