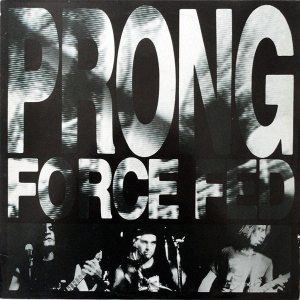 Prong's "proper" debut album - not "Primitive Origins". Prong themselves have said that "Force Fed" is their debut album. They once denied that they had one album before this one. Also, the music press often referred to "Force Fed" as the band's first album.

"Force Fed" was released independently on Spigot Records in 1988 with the original artwork shown on the left, while In-Effect/Relativity reissued the album in 1989 with the opposite cover.

"Bought And Sold" is omitted on the back cover of the original version,