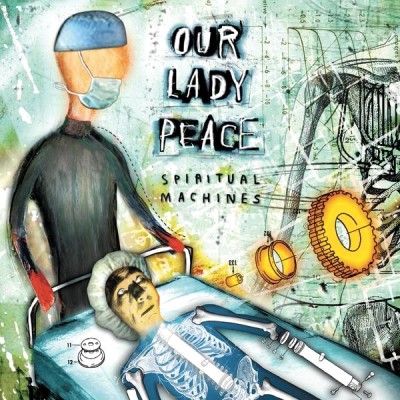 Additional notes
"The Wonderful Future" ends at (4:30), and is followed by roughly 12 minutes of silence, after which a hidden conversation between R.K. and Molly is heard.

Studio outtakes
Several known outtakes from the Spiritual Machines sessions were demos carried over from the Happiness... sessions, such as "Ordinary Day" and "Sleeping In". "Ordinary" is seen being played during demo sessions for Happiness... on the band's 1998 holiday fan club video. The lyrics were published in the Pied Piper's Union Christmas 1998 newsletter. A poor quality recording of the latter is available on YouTube as well as in trading circles. Other song names such as "La Bra" and "A Waste of Violence" (or The Weight of Violence) were revealed on web casts of the recording sessions or seen on original artwork by Oli Goldsmith.[68] A narrative outtake by Ray Kurzweil titled "R.K. Jack" was included as an intro to the track "Life" on A Decade.

In an August 18, 2000 article, it was revealed at that point that 8 songs were complete with four more being recorded in the past five weeks. This was before heading to New York to record "In Repair" and "Are You Sad", among others. Turner even noted "We've got so much music, we could even put another (album) out."