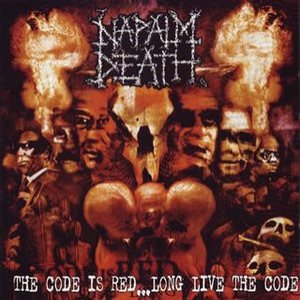 The Code Is Red... Long Live the Code

SludgeLeader
The Code Is Red... Long Live the Code Information

Llimited to 1500 copies with poster-covers (black and white cover-art, full colour poster). The vinyl edition has also "Losers"-lyrics printed on the covers. The song, however, does not exist on the vinyl.

Song 7 features Jello Biafra of Dead Kennedys fame as a guest vocalist. Other guest appearances are made by Jamey Jasta of Hatebreed, and Jeff Walker of Carcass fame.

Some editions of the album were released with a bonus disc that contains material from a variety of death-metal bands. The Napalm Death song "Silence Is Deafening" is the 1st track off the compilation.

The bonus disc is a CD sampler put out by Century Media Records/Olympic Recordings. This sampler was also made available in issue #50 of PIT Magazine as a free cd. Page 25 of PIT Magazine also contains a back insert that can be cut out and put into a CD case.