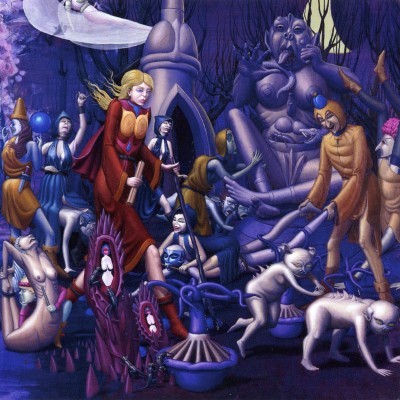 Re-released as a Dualdisc in 2009 with "Soul Sacrifice" EP as a bonus disc. The DVD side of the Dualdisc contains 'Return to the Forest', a 40 min documentary with key original band members, filmed in Coventry in 2009, and also featuring interviews with infamous cover artist Dave Patchett, and is an in depth exploration of the formation of Cathedral, the recording of "Forest of Equilibrium" and the impact of the record on the metal scene. It is divided in chapters:
01. Lee & Napalm
02. Getting Together
03. Inspirations
04. Choosing a Name
05. The Artwork
06. Early Shows
07. Speed
08. The Start of Something
09. Getting Signed
10. Ebony Tears Music Video

The cover shown on the right is actually half the actual album artwork.

According to artist Dave Patchett, the artwork, when seen in full, has a "dark" and a "light" side, with an asexual "hero character" appearing at ease in both.
Frontman Lee Dorrian's interpretation of it is of a life without religion, where you have to take both the good and bad and make the choices for yourself.