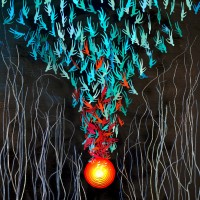 - Nancy -
It felt good. It was very moody. Some people cried more than others

- Corina -
But then, you know, like, the days after, I couldn't sleep

- Nancy -
Either they've died, or they aren't around, or they don't exist

I was thinking about how you look tonight. Ta-dah!

...And took pictures of the kids in front of it over the years, but never did anything to it. And so the cool part of this, honestly, he said he liked red, and so I always buy red roses at the Dundee florist 'cause if you buy two roses in there, they're a little spendy, but they last, like, two weeks and they're pretty. So, get this, when we went back to Cary — and we always go by Matty's old house — the rose bush was gone because they had... put some panelling up in the house