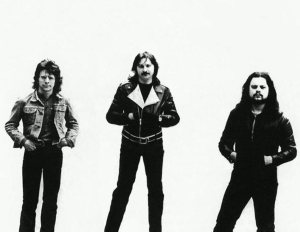 Formed in 1966 by Burke Shelley and a school friend on guitar. They found drummer Ray Phillips by placing an ad in the local paper. Tony Bourge joined in 1967.

They played a few gigs under the name Hills Contemporary Grass, before changing their name to Six Tonne Budgie, and eventually just Budgie (which is a small parrot).

Signing to MCA Records (UK), they released their debut in 1971, and followed it with one album per year until 1976. After touring the US in 1977, they released "Impeckable", their last album with Tony Bourge. In that same period of time, they did three tours with Judas Priest as their opening act

The band eventually called it quits in 1982, as the members had families and they found their priorities changing.

Burke Shelley reunited with Steve Williams in 1996, but they did not produce an album until "You're All Living in Cuckooland" in 2006.

Budgie's November 2010 tour of Eastern Europe had to be cancelled as Shelley was hospitalised on 9 November in Wejherowo, Poland, with a 6 cm aortic aneurism. After surgery, he returned to Britain for recovery. Since then the band halted any activities, as Shelley's health cannot endure a "two hour concert".

The reformed band is now based in San Antonio, Texas.