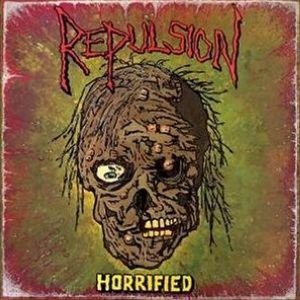 Originally released in 1986 as a demo called Slaughter of the Innocent. It was "officially" released as Horrified on the Necrosis label (owned by members of Carcass and a subdivision of Earache Records) in 1989.

In the song "Decomposed" the word "bitch" is clearly heard instead of the word "girl", which is stated on the booklet.