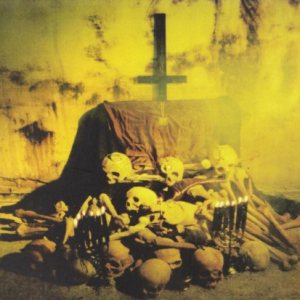 Additional notes
Re-released on LP by (#invalid label link ID#) in 2002. 300 copies on black vinyl.
Although this re-release was licensed from Nazgul's Eyrie Productions, Mortuary Drape consider this re-release to be a bootleg as they never authorised it.

Reissued January 4th, 2010 on CD ("Necropack Edition") by Reborn Records with the following bonus track:
12. Beyond the Veil (Live in Italy '98)

Reissued in June, 2011 as a limited edition of 66 copies "Secret Sudaria Necrodigipack" by Wild Prod.

Reissued on CD in 2011 by Dark Descent Records with the following bonus track:
12. Beyond the Veil (Live in Italy '98)