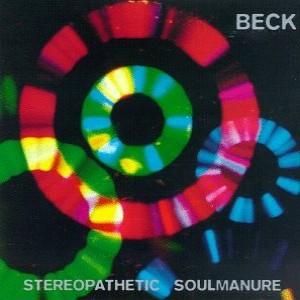 Additional notes
"Bonus Noise" is included on most discs, but not all.

"Bonus Noise" contains a reversed song called "In the Clover".
The techno introduction to "No Money No Honey" is a lo-fi sample of the song "Hall of Mirrors" by B12, found on their album Electro-Soma.
The introduction to "Today Has Been a Fucked Up Day" is a lo-fi sample of the song "Olivine" by Close Up Over (from the Black Dog Productions album Bytes.)
The track "Waitin' for a Train" is a cover of a Jimmie Rodgers song. It opens with a soundbite (spoken by Ross Harris) from Steve Hanft's film Normal. Hanft and Harris are both longtime friends and collaborators of Beck.[8]
The track "Thunder Peel" was re-recorded during the Odelay-era, with the new version appearing on the Japanese edition of "The New Pollution" single and later appearing (in mono, with the original recording being in stereo) on the deluxe version of that album.
Johnny Cash covered the song "Rowboat" on his 1996 album Unchained.