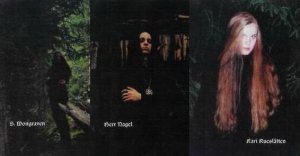 After Nordavind was released, Kari Rueslåtten stated in the Norwegian music newspaper Puls that when she agreed to join the project, she made sure that there would be no extreme lyrics in the songs, but then she felt betrayed by Satyr and Fenriz, because the latter one wrote a new end to the song 'Oppi fjellet': "...en grusom død til hver en mann/som ikke hyller vårt faderland..." (...a horrifying death to every man/who doesn't hail our fatherland...) and "...om du noengang lukter kristenmannsblod/oppi fjellet, oppi fjellet/ja hent øksa og hugg dem ned/oppi fjellet, oppi fjellet" (..if you ever smell the Christian man's blood/up in the mountains, up in the mountains/then get your axe and chop them down/up in the mountains, up in the mountains). According to Kari "I reacted very strongly when I heard that they had changed the lyric, but I wasn't strong enough to say no. Now I want that people shall forget this. I feel totally crushed, and I feel that I have lost everything but people must accept that I have made a mistake. And they have to see me as the person I am, as the artist I am. I don't want to be punished more than I already have been punished through this".

The lyrics from the first paragraph of the song Nagellstev, are the same as the words said by "The Girl" in Ulver's song "Capitel II - Soelen gaaer bag aase need" from the Bergtatt album, minus the archaic way of writing.