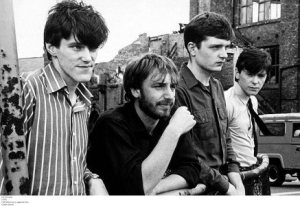 Additional notes
Joy Division were a British rock band formed in 1976 in Salford, Greater Manchester. They were originally named Stiff Kittens, then changed their name to Warsaw and finally became Joy Division before recording and releasing their first 7" EP "An Ideal For Living". They considered themselves one of the pioneers of post-punk movement.