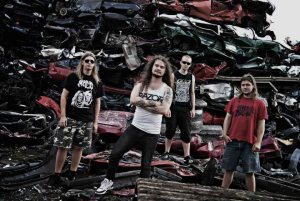 Additional notes
Battery is a Thrash metal band from Denmark, and has been thrashing since 2008. The band was formed in febuary 2008 by Chris and Andreas after the demise of their former band Abattoir. In the summer 2009 Jannick joined the band. The first rehearsal demo was recorded in 2008 with former rythm Guitarist Dennis.