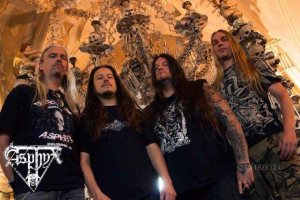 Additional notes
Asphyx was formed in 1987 by Bob Bagchus and Tony Brookhuis. Christian Colli was picked up for vocals and bass. This line up recorded the first two demos, after which Eric Daniels was added.

In March 1989 Colli was replaced with Theo Loomans and the band recorded the Crush the Cenotaph demo. Brookhuis then left the band and the remaining three recorded Embrace the Death album which was never released due to label problems.

After Martin van Drunen left Pestilence in the early 1990s, he joined Asphyx and the band signed to Century Media Records. After the release of their debut album, The Rack, they went on a European tour with Entombed. Followed by a tour with Bolt Thrower and Benediction in 1992.

In 1996 Loomans and Baghus reformed Asphyx and recorded the God Cries album. Around the same time also the Embrace the Death album was finally released. Nevertheless the band split-up again after the release. In 1996 Soulburn was founded by Baghus and Daniels and together with Pentacle singer and bassist Wannes Gubbels they recorded the Feeding on Angels album.

In 1999 they renamed the project Soulburn into Asphyx and recorded the On the Wings of Inferno album with the same line-up. However, Asphyx disbanded once again in 2000.