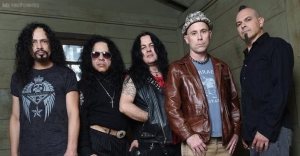 Additional notes
Phil Sandoval left during the recordings of the "Delirious Nomad" album. The band carried on as a four-piece until Alan Barlam briefly joined and was shortly replaced by Jeff Duncan. Drummer Gonzo Sandoval also quit in 1988.

When Armored Saint's other founding guitarist Dave Prichard died of leukemia in 1990, both Sandoval brothers returned to the band for the recording of "Symbol of Salvation" (with Phil thus playing guitar alongside his eventual replacement). After the release of the album, John Bush joined Anthrax and the band called it quits.

The Sandoval brothers started the short-lived Life After Death.

Armored Saint have since then reunited on and off over the years for albums and tours, becoming more of a presence since John Bush left Anthrax for the last time.

They appeared in the movie "Hellraiser III: Hell on Earth" playing "Hanging Judge" live on stage.