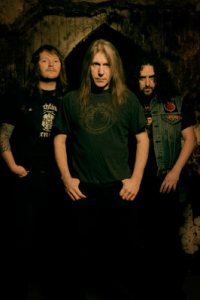 On 1980, Bronze Records picked up the band and they soon proceeded to record and release their self-titled debut album. This album is considered one of the most notable from the NWOBHM, but subsequent to the album's release, the band's structure began to fall apart. Kevin Riddles and Dave Hogg left the band to join Tytan, and despite Heybourne's attempts to continue Angel Witch with other musicians, came the end of the band and he joined Deep Machine.