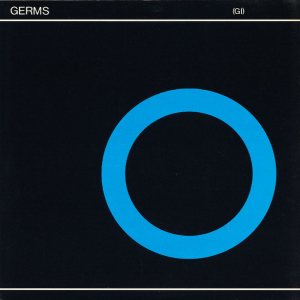 Additional notes
First pressing in pasteboard-style sleeve (brown cardboard-colored inside, unlike later ones which are white inside) and with a two-sided lyrics insert instead of a printed inner sleeve.

All original pressings (1st, 2nd, and probably beyond) have no text along spine of sleeve. The T-shirt insert was not included with the first pressing as several of the T-shirts reference later Slash label releases.

Track 16 is a Performed Live.

The record has actually no title, as the band's name was changed into Germs (GI). Nonetheless, "(GI)" is usually the title this LP is referred to.

The "Caught in the Eye" song only appears on the 2012 CD release and the cassette.