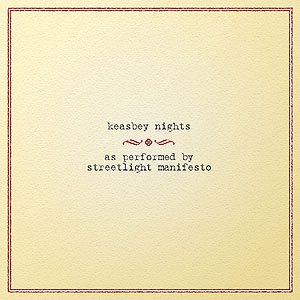 Additional notes
Originaly released by Kalkony's former band, Catch 22.
In 2004 Kalnoky decided to re-record Keasbey Nights with his new band Streetlight Manifesto. The decision was prompted by Victory Records' plan to re-release the album with additional content. The Streetlight Manifesto version was originally scheduled to be released in late 2004, but was continually delayed until being released on March 7, 2006.

The re-recorded version includes several musical and lyrical changes from the original. "Dear Sergio" includes an extra verse that Kalnoky had added when he recorded the song with the Bandits of the Acoustic Revolution on A Call to Arms (2001). Day In, Day Out features a new verse in place of playing the first verse again. The muted trumpet solo in "This One Goes Out To..." was replaced with a tenor saxophone, and different instruments were also used during the solo section of "Kristina She Don't Know I Exist". Most notably, Kalnoky replaced the shout-outs during the extended ending of "1234, 1234" with a text-to-speech transcription of an interview in which he explains his motivations for re-recording the album