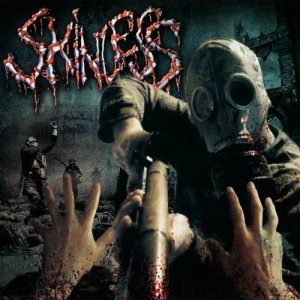 Trample the Weak, Hurdle the Dead

Shown on the album cover the man in the gas mask is Skinless guitarist Noah Carpenter. The rifle he is holding is a M1 Garand. The art design was a collaboration of Carpenter and Relapse Records graphic designer Orion Landau. The hands shown in the foreground are Landau's hands. On the right sleeve of the gas mask guy there's an "Ibanez" logo. The background image is a mixture of World War 1 and World War 2 photos.

Released by Irond Records in Russia.