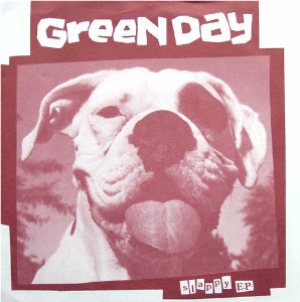 Additional notes
The dog on the cover of Slappy was known as Mickey. "Slappy" was a nickname given to him by Mike Dirnt's friend Jason Relva.
"Why Do You Want Him?" was reportedly written by Armstrong when he was 14 years old and was the first song he wrote.
"409 in Your Coffeemaker" was re-recorded for the group's third studio album Dookie in 1994. However, the band declined having it put on the record. The Dookie recording of the song can still be found in "unmixed" form on the U.K. "Basket Case" single. Armstrong has also stated that "409 in Your Coffeemaker" is his favorite song off of Slappy.