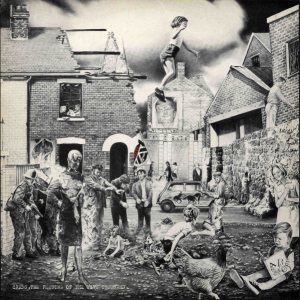 The Feeding of the Five Thousand

SludgeLeader
The Feeding of the Five Thousand Information

Additional notes
Sleeve with an empty, white spine. Back cover of sleeve is printed upside-down compared to the front cover. Contains a folded inner sheet in 12" size with liner notes, credits and lyrics.

Inner Sheet:
eve libertine/voice on asylum
all material ©℗Ⓐ CRASS.1978.
recorded live at southern studios ink.london.29/10/78.
special thanks to john of southern studios, to larry williams, and to pete, mari and alan of small wonder.

Runout:
'TB' is written as a ligature.

External Information:
First 12-inch record by Crass.
A1 was meant to be the track 'Asylum', vocals credited to Eve Libertine on the inner sheet, but no company would press the record with this track. It was replaced with silence. The lyrics for this track on the insert are covered with a black bar with an explanation.

Re-released in 1981 by Crass Records with different album title "The Feeding of the Five Thousand (The Second Sitting)" and a different cover art.

"The Second Sitting" signifies that this is a reissue of the original release on Small Wonder Records, having track A1 'Asylum' included (as originally intended on the first release).

This is the first Crass Records edition: "Pay no more than £2.00" appears on the right margin.

The Feeding of the Five Thousand Comments