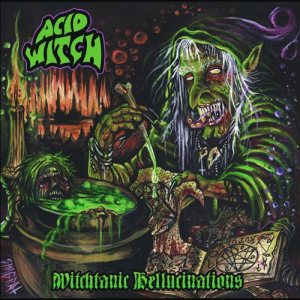 The following text is printed on the CD:

"Unauthorized copying of this material is prohibited, if caught you will face up to 13 years of sucking cold smelly pus crusted WITCHES TITS"

Reissued on CD by Hells Headbangers Records on October 31st, 2012 with a new layout.

Reissued on LP by Hells Headbangers Records in February, 2013: Comes in a Gatefold cover with a large 18"x24" poster of the cover artwork and an old school Acid Witch Halloween die-cut decoration similar to the spooky die-cuts of the 60s, 70s and 80s. The records come in a poly-lined black inner sleeve to prevent scratching & static.
Unspecified numbers of copies in Black, olive green / grimace purple and orange-in-black. 222 copies with a picture disc.