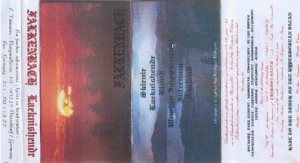 The track 'Laeknishendr' can also be found on 'Promo 1995', '...En Their Medh Riki Fara...' and 'Heralding - The Fireblade' (spelled there as "Læknishendr", all other versions are spelled "Laeknishendr"). All aforementioned versions are different.

The song 'Skirnir' can also be found on the 'Heralding - The Fireblade' album, in re-written form.

'Asaland' was re-arranged, re-recorded and then used as a bonus track on the "Tiurida" album in 2011.

According to an old interview (Skogen #3, 1996) with Icelander Aðalbjörn Tryggvason, this demo was recorded at a location in one of Iceland's national parks, called "Þingvellir".

There is an unauthorised tape version, where all tracks were accidentally sped up during mastering, cutting the total duration by some minutes to a length of 39:30.